We are pleased to offer this superb Mk2 Golf GTI small bumper version for sale,an iconic hot hatch of the 80’s/90’s and still just as much fun to drive today!To find a totally rust free Mk2 in virtually stock original condtion is very rare today and the mild modifications fitted to this car can easily be reverted back to stock if the new owner desires.This car was supplied new in Tokyo Japan and the years have been very kind to it,with low genuine mileage and having lived all it’s life on salt free roads this is the best condition Mk2 GTI you’d ever hope to find,viewing is essential.We have driven it briefly on UK roads in the dry and with light weight and a revvy 16V engine with plenty of power it’s an addictive combination,they simply don’t make hot hatches like this anymore!

The Mk 2 Golf GTi 16V was not only better built than it's older sibling, but now had a whisker under 140 bhp with better breathing courtesy of the 16V twin cam head, to cope with an increase in weight of 120kg. In it's day, the 16V was the king of hot hatches, offering a package of every-day performance, rock solid build quality and safety. The Mk. 2 Golf was strongly built and held a strong reputation for quality & reliability (Click here & here to see original VW 1990's Golf GTi U.K. Adverts).
With it's go-cart like handling, it appealed especially to younger drivers and therein many of those that survive today have been given hard lives at the hands of young merciless drivers, or been extensively modified. Today there are very few left in low mileage original condition, like this example.

Many 1980's & 90's icons that are now collectable have been increasing sharply in price and we can see they will continue to rise in value going forward. We knew of Mk. 2 16V Golfs that had originally been supplied new in Japan and so we searched and rejected several less than perfect examples till we finally came across this, after nearly a year of searching. With genuinely very low mileage for a car of 1989, this must be one of the lowest mileage examples today. Not only this, but having been in Japan all of it's life and (so far) never registered or used in any other country has been golden for preservation of originality and keeping it completely corrosion free.

To explain it's rust free condition, it's important to understand that in Japan, all roads are drained of water through the use of efficient concrete storm ditches (there are heavy rains at times from typhoons and Japan is 70% mountain terrain with forest, so safety is paramount). This means there is no mud & debris washed onto roads during storms, unlike what is commonly seen in Europe. Roads in Japan are also probably the best maintained worldwide, without potholes, mostly smooth surfaces with good grip, etc. Japan is also the country with the largest network of roads in the world for a given area.

No salt, grit or sand is laid on surfaces over winters in the most populated areas, as urban towns & cities are invariably built on lower plains, due to risk of earthquakes and consequential landslides that would be risked if building on mountain areas. Because roads are well designed and maintained in Japan, this means undersides of Japanese cars don't tend to be covered in electrolytic dirt and so when the underside gets wet in rain corrosion is much less likely to develop. Essentially the cars are washed by clean rain in Japan if they get wet and explains why cars used in Japan are typically completely rust free, including their undersides and all components. By contrast if you feel the inner arch of a car that's been on British roads for a decade or more, it will have corrugated dirt built up inside, which is electrolytic when wet and therefore corrosive. Corrosion to these VW's was common in much of Europe, where they were road driven.

In keeping with the history of it's life in Japan this example, although rust proofed as new from the factory, has no corrosion at all to the underside.
Even the fuel pump, although original still has original nickel plating on hose fittings, black paint on brackets, etc.

Note that in Japan it's not uncommon for imports to be LHD despite being a RHD country. This is because after WW2 there were no cars of good quality made in Japan yet, so imports were considered a status symbol. As there is very little legal overtaking on the opposite side of the road in Japan, LHD remains a status symbol. All exotica, Prestige and such are LHD in Japan.

Performance & Suspension Improvements: The exhaust has been uprated with a stainless steel sports back-box from Cox. Note the remainder of the exhaust system is all original and still completely solid. Suspension has been uprated with the use of coilovers & anti-roll bars by Auto Refine, Japan. These are complimented by a front sub frame brace plus Auto Refine front & rear tower (aluminium) braces. This is a specialist company that has built it's reputation on quality suspension for cars in Japan, both imported and domestic.
The result in this Golf 16V's case is a chassis that is compliant, comfortable and confidence inspiring to corner enthusiastically with, offering reduced body-roll and even better control & adjustability under hard cornering than standard. Note that the coilovers are independently height adjustable too.

Condition is unique:This example has been amazingly well preserved. The interior looks as if it's barely been sat in. The body is completely straight and paintwork original and still beautiful, the mechanicals (incl. suspension bushes, etc) all show low wear and best of all the chassis condition is 100% corrosion free. Even the fuel pump's fittings still carry their original nickel plating and bolts, etc. are rust free. If you compare to a UK car, it'll either have this covered in rust or a thick coating of underseal to hide the corrosion beneath it! The original wheels on this car and their condition after 24 years of (occasional) use have zero corrosion, even on the inside.

This Golf GTi 16V  is now in the UK and has been registered,serviced, MOT'd and currently in dry storage, ready for it's new owner and can be viewed by appointment. Being LHD we expect it to find a new owner anywhere in Europe. Shipping worldwide is also available,please just ask us for a quote. 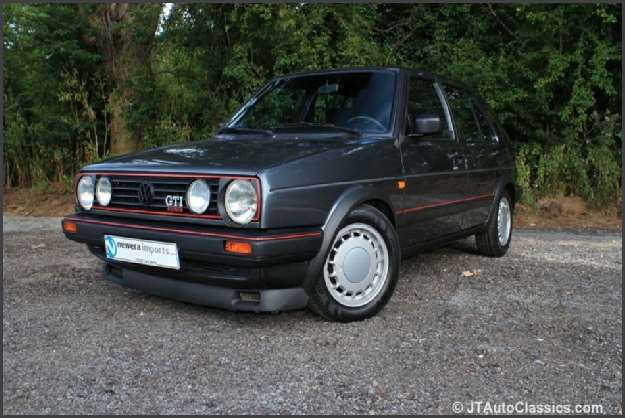