Launched in May 1997 to replace the outgoing 850R, the V70R is considered by those who know, to be one of the best fast estates of the 90’s, capable of offering a long service life with high mileages and reliability if well maintained. There were 3 phases of the 1st generation V70R, with the best - as usual, saved for last.

A new 2.4L engine 2435cc / Engine Code B5244RT) was introduced and power increased from (250 bhp - phase 2) to 265 bhp by use of a larger (19T) turbo and all-new variable valve timing. Torque was now up to 400N.m (300 lb·ft) @2500 rpm. The engine was uprated with stronger internal components to cope with this added power and torque. A fly-by wire ME7 engine management system was also introduced along with a 5-Speed Adaptive Automatic gearbox combined with an advanced system 4WD.

Phase 3 V70R's were distinguishable by their twin exhaust silencers with a specially designed rear bumper - twin exhausts helping improve high rev gas-flow (The first time Volvo had fitted a twin-silencer system to any of their cars). Rear brakes were also upgraded to include vented discs. Featured 5-spoke alloy wheels are Volvo's 17” R design - again, unique to this model. Externally, Xenon HID headlights and a new roof rail design completed the feature changes to previous phase 1 & 2 models. For improved safety, a  WHIPS" (Whiplash protection) system and larger SIPS side-airbags were added to maximize head protection in the event of a side impact.

Nobody expected Volvo to make a very fast 4WD estate, but the perhaps entertaining truth found by those who challenged it was that this model was capable of embarrassing other seemingly fast cars, whether on a typically damp UK country roads, or on Motorways. To this day the Volvo V70R AWD remains a superb & versatile performance car capable of handling anything from the weekly shop, to being used as a car for business, offering tough, reliable spaceous and comfortable practicality with the ability to dispatch 0-60 in just 7.2 seconds and  go on to top out at (a restricted) 155mph.

Corrosion resistance is generally excellent with these, but examples that have been on UK & European roads all of their lives will already have been subject to almost 2 decades of annual winter salt, mud & sand as a layer that tends to build up over the years attaching itself to the underside, arches, exhaust, engine bay, etc. This mixture often finds itself mixed with moisture resulting from use in typical weather in the UK. All combined this makes an effective electrolytic substance which is the cause of rust & other problems associated with corrosion. By contrast, in Japan cars don't corrode in the same way as in UK & Europe. It shocks people when they see how corrosion free a well chosen can from Japan can actually be... Such as this low mileage V70R phase 3, for example! As these V70R's were generally used as reliable workhorses (capable of very high mileages) on a daily basis, the vast majority in Europe & Scandinavia have suffered from rust & abuse. Despite this, they have a cult following, especially in Scandinavia, so it's possible the Swedes & Norgegians know a thing or two about how tough these old Volvos are.

Condition Report: This example finished in beautiful Black Stone metallic is clearly an example in unique condition throughout. It has been owned & used since new only on Japan's salt-free & pristinely maintained roads. Paintwork is visibly stunning on this example. Highly reflective with a deep glossy shine, its evident this V70R has always been kept under a car port or garaged by its previous mature owner and was cared for throughout it’s time in Japan. The black stone paint suits this car very well looking rather purposeful if not a little evil for a modern classic Volvo.

It's completely rust free throughout. Underneath its like new (See pictures of the underside condition & rust free nature of the original - standard exhausts) and even the wheels (with original finish) have ZERO corrosion on them. They're fitted with Pirelli tyres in good condition too. Whilst detailing this car, we noticed 2 carefully touched-in scratches located on the o/s/r/ door and n/s/f/ door. They're well repaired and hard to distinguish, but are mentioned (& shown in pictures) to give a complete report. Being regularly washed & polished, the paint remains superb. Even small wheel scratches or tiny paint chips were carefully touched in with well-matched paint. The result is a car so well preserved throughout, it still looks near new some 17 years after it rolled off the production line.

Interior as pictures show is in fantastic condition throughout showing minimal wear and a great patina. The heated leather/alcantara diamond stitched seats are in superb condition, there are no cigarette burns or stains either. Steering wheel is unworn, as is the shift lever - similarly near new. Ashtray has had virtually no use at all so we believe this was a non-smoker's car. Floor mats are also in excellent condition, with no stains, which indicates to us that this car was mainly used in the city and the carpet on the boot floor is still like new, indicating this car wasn't used for load carrying much - if ever.Interior has factory integrity about it with nothing showing sighs of abuse. The whole feeling is of a car that is incredibily solid and surefooted.

Test Drive: We test drove this example at length and are pleased to report it is a delight to drive! The charismatic 5-pot 20V engine is smooth and powerful and provides plenty of overtaking punch when summoned. The 5-speed adaptive automatc gearbox shifts smoothly and precisely and is a real pleasure to use. No clonks or rattles at all from the drivetrain, just smooth refined progress.

This V70R comes with original manuals and service history. It's clearly been very well cared for by it’s previous mature owner.

The overall condition of this example is fantastic and we are confident this car will go to someone who truly appreciates the Phase 3 V70R and wants the very best.Costing £38,000 when new in 2000 this is a lot of Performance estate car for the money.

Priced at  £SOLD OTR to include full UK registration, 12 months MOT, full service  and valet .Currently held in Japan this unique Volvo V70R AWD can be reserved with a deposit of £1000 for prompt shipment to the UK. 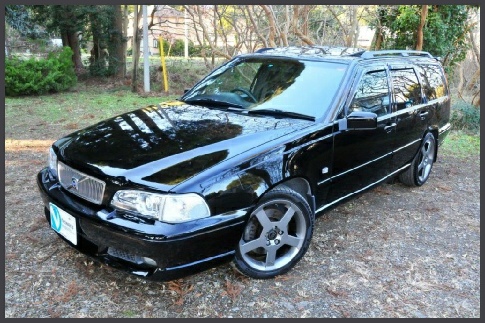